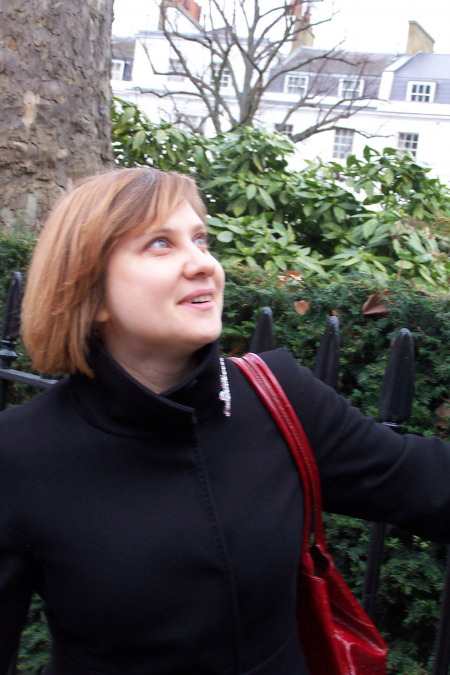 A rendezvous in a Notting Hill café, a mystery of the digits 6-6-6, a snapshot taken at the Christmas reception, a stranger, looking strangely familiar, and a coincidental encounter on a snowy yacht — what is it — a number of unconnected coincidences or meaningful signs in the lives of the two seemingly different yet so similar young people?

Seraphima Bogomolova
Seraphima Nickolaevna Bogomolova was born in St Petersburg, Russia, into a family of scientist and intellectuals, — her mother, Tatiana Jurilo, is a Doctor of Philosophy with the research on non-commercial use of lasers and her late father, Nikolai Nickolaevitch Bogomolov, used to work on development of fuel for spaceships. Thus, Seraphima was raised in a spirit of innovation, independent thinking and creative solution approach. She holds a BSc degree in English and American Literature, received in a private Institute of Foreign Languages in St Petersburg, with her favourite author being a non-English though — Alexandre Pushkin — a poet, playwright, and novelist of the Romantic era and the founder of modern Russian literature. As a kid Seraphima went to a French language school but it never grew on her. On her own initiative she studied English language, dreaming of becoming one day an international affairs reporter, travelling the world and sharing cultural and social news. However, after graduating from the IFL she was set for a different kind of adventure, becoming involved with media industry, promoting and marketing lifestyle publications. Seraphima’s talent in visual creative writing and artistic streak combined lead her to the path of first producing story-based ballets to her own scripts, «A Night in Paris’ Christmas ballet (2016), «I’m Your Man’’musical ballet (2017) and «Christmas X 3» magical realism ballet (2017) and now to screenplay writing with her current finished work being a screenplay «A Tricky Game’ (2018). An idea for «A Tricky Game’ was originally conceived in 2013 and was first realised as a script styled novella. Four years later and several books and productions in between Seraphima has decided to re-write «A Tricky Game’ making it into a proper screenplay as it always destined to be. Her other literary works include books — «Puzzled’ (2014) in Russian and English, «Unknowns’ (2014) in Russian, and «Mystery of Orient Express’ (2015) in Russian. Seraphima Nickolaevna Bogomolova is also the Founder and Managing Director of the Souliris productions, an independent company specialising on producing unique ballet performances staged in exclusive locations. Her life circumstances have brought Seraphima to many cities and countries of the world, including London, New York, Moscow, Dubai, and Geneva. But her all-time favourite city remains London — a melting pot of creativity, individualism and quirky ideas.